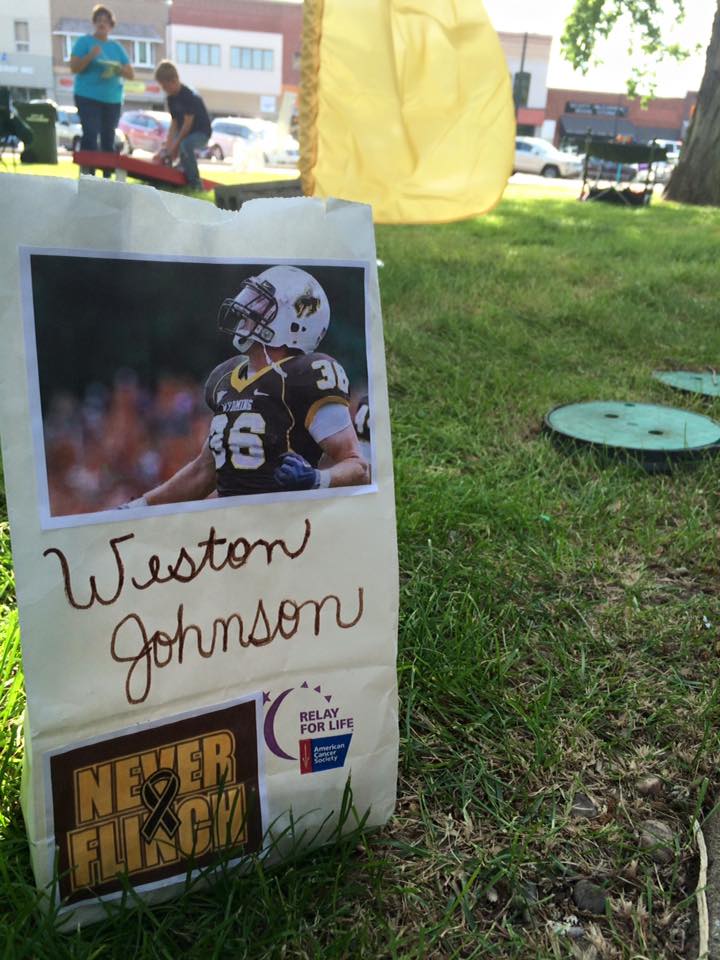 Never Flinch: An inspirational phrase calling individuals to the battle line with the mentality to face adversity by running straight through it.

Weston L. Johnson was born in 1987 to Blane and Jill Johnson in Lakin, KS. When he was three, they moved to Great Bend, KS and at eight years old, moved to Wray, CO. With no history of Melanoma in the family, everybody was shocked when a malignant mole was removed from the base of his neck at the age of 17. The traumatic event was enough for the young man to change his lifestyle. Weston limited his sun exposure and returned for bi-annual and then annually for routine exams to ensure a healthy prognosis.

Despite the setback, Weston rose and overcame his fears and lead a normal and very successful start to his adult life. Achieving a high skill level in athletics was natural for Weston. He excelled in numerous sports with football being his favorite. Weston made All-State honors in High School and went on to Laramie to play Division I football for the Cowboys. At 6’3″ and 230 lbs., Weston started at Outside Linebacker and shared the role of Team Captain.

Along with Athletics, Weston was an Honor Student and obtained multiple awards while maintaining a high GPA. After college, Weston signed a Free Agent Contract with the Atlanta Falcons and played one pre-season game before being cut from the final roster. One knows an individual is special when they’ve accomplished this amount by their 23rd Birthday.

Life was going well for the talented young man. Weston took a Marketing position with EMIT Technologies in Sheridan, WY and began coaching football at Sheridan High School. Shortly before his 26th Birthday, Weston noticed a couple of lumps, one on his back and one on his head. These findings were almost nine years after the initial Melanoma was removed. As the severity of Weston’s case was revealed, the family knew the odds weren’t in his favor. In January of 2013, Weston was diagnosed with Stage Four Metastatic Melanoma and was given six months to live.

The term Never Flinch now brought on a whole new meaning, much different than the first time it was shared with him on the football field by his high school coach.

Weston began exhaustive treatments and hence, Never Flinch was born. It started as a Facebook page to help support Weston and his family emotionally and financially. During this time, Weston underwent numerous Craniotomies and multiple surgeries while also trying every treatment option available. Throughout this time, Weston continued influencing people with his wit, laughter, dedication, and strength. Weston fought the good fight, he finished the race and was given his crown of righteousness two days past his 27th Birthday.

The Johnson Family was overwhelmed with the outpouring of support during his courageous bout with Melanoma. Individuals selflessly gave of their time and money to support the family, which allowed them to seek the best medical care available without realizing stressful financial burdens. Never Flinch, the Foundation is a 501(c)3 Non-Profit Organization seeking to give back to those individuals who are currently battling and in treatment for any type of cancer. Through our Mission and Vision, we aim to raise money to help cover out of pocket expenses related to your treatment including travel and lodging.